We’re currently in the middle of performance and development review time at Vanti and I thought it would be good to talk a bit about feedback.

At Vanti, we’re building a culture of constant evolution, but in a non-traditionally hierarchical environment. Over the next few months, we’ll be innovating how we run PDR meetings so that they happen much more organically and regularly. This month, however, we’re doing running a more conventional approach to mark the end of the year.

We’re moving towards a business that has a much more fluid hierarchies, based on experience and knowledge, rather than static ones based on job titles and ‘promotions’. This means each person can request who they have their PDR with, and who they get feedback from, including other teams and even clients and suppliers.

The way I’m encouraging everyone to think about this this year is to reduce a particular part of the Johari window, so that we can minimise blindspots. 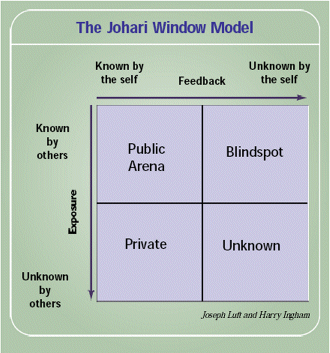 This model was produced by two guys called John and Harry (geddit?) and is actually a practical lens on feedback and self-discovery.

The Johari window looks at what you know about yourself and what other people know about you. Obviously, in one way, it’s glossing over a lot of complexity (What do we mean by ‘know’? Which other people?) but it’s a useful tool as far as it goes.

There are four areas:

Private: What you all don’t know is that there are times when I get really nervous about going into social situations.

Unknown: What neither of us know is that… maybe I’m really good at project scoping documents, but I’ve never tried. Unlikely, but we don’t know.

Blindspot: Maybe you know that actually I do this thing which really annoys you, but I don’t realise.

In that final example, it would be good for me to uncover that blindspot so I can be a better team member, and, well, a more effective human.

Performance and development reviews have a clear role in reducing blindspots by seeking/receiving feedback. We can’t know everything about ourselves. It could be that we’re having an impact we didn’t realise – positive or negative – or simply that we don’t know that we’re actually really good at something.

That’s what we’re going to be doing over the next few weeks – all working on uncovering our blindspots and getting better at getting things done, in the Vanti way!

2 thoughts on “How to reduce blindspots”