We’re thrilled to announce that we’re now an award-winning team!

Our project work on the Library of Birmingham has been recognized and celebrated through winning the 2014 EMEA InAVation award for best Public Sector/ Government Facility. 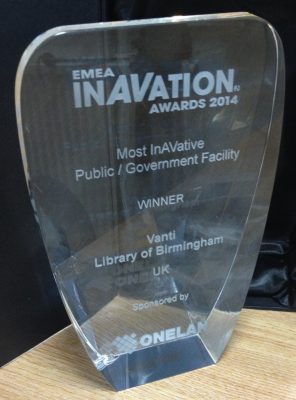 The award ceremony, run by InAVate magazine, which was held on February 5th in Amsterdam is now in its eighth year and celebrates innovation and outstanding projects and products, bringing together AV professionals from Europe, the Middle East and Africa.

A panel of industry experts voted to reward projects which were completed to an outstanding level and with a focus on the seamless integration of AV and IT. We like to think this was the case with the Library of Birmingham where the library’s digital focus called for state of the art AV technology to be combined with simplicity to allow the general public to use the library’s interactive features.

Judging notes from the event revealed that

‘The stunning architectural feat that is the Library of Birmingham also provided some challenges for integrator Vanti. Successfully and sensitively overcoming these challenges was one of the reasons that Vanti was shortlisted for this award. However, it was the use of technology to make this library a modern, relevant, fun and useful resources for members of the public from all ages that saw it top this category. Furthermore, the technology installed here directly contributes to the library’s appeal as a hireable events and meeting space’.

Read more about our award winning work with the Library of Birmingham.