We’re working on some incredibly exciting stuff at Vanti in terms of culture and we want to keep you informed. This article is the first in an ongoing series of in-public experimenting that we’re doing to involve you in our progress. Hopefully we’ll inspire you to experiment yourself.

My job at Vanti is very difficult to describe. I think of myself as the Culture Gardener. I come in once or twice a week and listen to people, look at interactions, think about strategy and help to nudge the culture in the direction everyone wants it to go. Maybe I’ll mediate a conversation, write an article, record a video, run a workshop, prototype a process, implement a new way of doing something. Along with the rest of Vanti, I try and get a sense of what Vanti wants to become.

This is a pretty complex topic, so we’ve split the intro into five blog posts in order that you can get a detailed understanding of our starting point. Sometimes when you read about other people’s successes, it can be tempting to dismiss what they’re doing, in a kind of ‘Yeah, well, it’s easy for you’ kind of way.

We want to show you our strengths but also our challenges. We’re very aware that the sector we’re in is going to very soon be at the centre of immense volatility (as is society) and last century’s industrial ways of doing things just aren’t going to cut it.

As an incredibly fast-growing tech company, it would be easy to follow the path that society has laid out: hierarchical structure, KPIs, top-down decisions, and a company made up of people from a very similar set of demographics, pursuing only financial goals. That’s not our path.

We want to do things very differently.

1. To create incredible, user-focused digital experiences within the built environment

We want to use technology to help create spaces that respond and flex for the people in them, in a way that has a positive impact on society and the planet. (That society/planet part is worth highlighting. For way too long, tech has tried to be a goal in itself. Doing good as a business whilst doing well as a business is vital to us.) At the moment, this arena is called ‘smart buildings’ but we think that’s a fairly limiting term for a massive new field.

2. To become a beacon employer

We want Vanti to be a place where smart people can be totally themselves, no matter the aspects of their identity; a place where they have fascinating work to do in a deeply humane environment, which in turn means they stay for the long haul. A place where everyone takes responsibility for change and everyone brings their whole self to work.

My ambition in addition to this is that we become an employer that is recognised as being inclusive and equitable in terms of race, gender, sexuality and ability; an organisation that truly walks the talk and shows how it can be done.

The bigger picture of what we’re doing culture-wise has been inspired by the Teal concept in Frederic Laloux’s Reinventing Organisations work. I introduced the team to this framework a while back and it’s been our loose inspiration ever since.

This video offers quite a good overview of the various types of organisations that exist in the world:

Laloux describes the journey from:

Organisation as Gang (Red) – Ruled by fear, you’re looked after as long as you belong, but your loyalty has to be unquestioning. The size of Red organisations is limited by the reach of the person at the centre, and can be terrifying to work inside. There is no concern for what is outside of the limited scope of the firm. Think The Godfather. It’s quite rare to find organisations like this in the mainstream world, but some departments or teams can feel this way.

Organisation as a Hierarchy (Amber) – Power comes from role/uniform/rank. The reach of Amber organisations is exponentially larger as compared to Red organisations, but they are very, very slow to change and contain a lot of scope for abuse of power. Think Army/Catholic Church/County councils.

Organisation as a Machine (Orange) – Pursues profits/shareholder value at all costs, people are replaceable parts (‘human resources’), and responds to the market, but there’s a great deal of distance between the people on the ground and the people making the decisions, which leads to slow, lumbering change or running fast in the wrong direction. (Also, Orange organisations’ single-minded pursuit of siloed goals is the cause of much of the environmental and societal damage we’re seeing in the world.) This is basically every major corporation you can think of: Apple, Tesco, Starbucks, Virgin…

Organisation as Family (Green) – Some organisations have values baked in that go beyond financial ones – for example, businesses with a triple bottom line of people and planet in addition to profit. Where Orange businesses sometimes talk the talk of ‘family’ and ‘people’ and ‘corporate social responsibility’, Green businesses really do care about their effect on the environment and how their people are treated.

Some of the downsides of this model are like the dysfunctions of any family: stuck in guilty relationships that are difficult to get out of, boundaries between work and non-work life are blurred, and conflict is avoided at the dinner table, so to speak, meaning resentments can simmer. Companies like Method, Etsy, and even DHL are making strides towards centring positive social and environmental impact in the way they work day-to-day.

Organisation as Organism (Teal) – Teal organisations have very little central control, but are more like networks of self-managed teams. They require rethinking all of the structures of pay, hiring, development, decision-making… Teal organisations are incredibly responsive to changes in their surroundings, including the market, and have incredible scope for people to be whole and bring all of their skills, intelligence and heart to work. 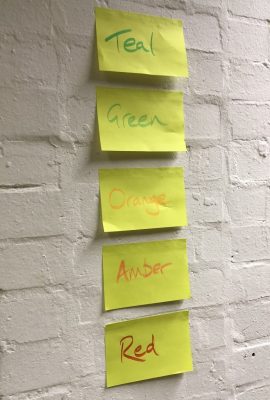 There are examples of existing companies that operate this way, but largely this form of organisation is being invented on the go, bespoke to each firm’s context and mission. The potential downsides are the journey here is not straightforward, and it requires ongoing consciousness, communication and smart conflict processing, plus hiring and training people who like being in an ever-evolving system.

Here is a more detailed article on the principles and of course you can read Laloux’s book (as a Pay-what-feels-right download or on Amazon). Alternatively, we highly recommend the shorter illustrated version (also available Pay-what-feels-right and Amazon!). There’s also a rabbit-hole wiki based on the book too.

Vanti is currently somewhere between Orange and Green, and we’re making strides to move to Teal, but actually making Teal work in our specific environment is something that just has never really been done.

One of my favourite concepts from the Tao Te Jing, the major Taoist text, is something like: the path that you can see isn’t the path. As in, if Vanti try and do things in the standard way, that’s probably not the way that’s most appropriate for us, as we’re aiming to do things that haven’t been done before.

We’re literally learning as we go along and that’s what we’re going to be sharing with you over the next few months and years.

Thanks for coming on the journey with us! Next up: we discuss our strengths…